VODKA AND SMALL TALK: Brent and Emma were originally set up by a mutual friend on a group outing but the two of them didn’t initially want a bar of it, so they ignored each other for most of the night. Later that year however, at the same friend’s birthday party, Emma didn’t know anyone else there. So with the help of some vodka, she began talking to Brent and the rest, as they say, is history!

THE PINTEREST HACK PROPOSAL: After having been in Europe for four weeks visiting a friend, Emma returned to a special date that Brent had planned for the two of them at the zoo. This led to Emma receiving a fortune cookie with the note reading ‘marry me?’ But that’s not all! The couple later went bowling, as they had done on their first date and then had plans to head to dinner. Dinner ended up being a surprise engagement party, at which all the guests thought they were heading to a housewarming! Brent had hacked Emma’s Pinterest account to see what ideas she had saved, and used this to plan the party! He had orchestrated a surprise party for both Emma and all guests in attendance.

CASUAL AND RUSTIC: The couple had 100 of their loved ones in attendance, the wedding being held at Roombas at Mt Aitken. Emma and Brent wanted a laid back atmosphere, without the fancy bells and whistles. They chose to have a homestead/rustic kind of theme but most importantly, didn’t want the guests feeling uncomfortable and out of place if it was too fancy. Most of the wedding elements were made by the couple including, invitations, bomboniere, centrepieces, and guestbook.

BRIDES ADVICE: “Everyone gives you advice of what they think is good and what should be done but at the end of the day it’s about you and your fiancé. In the end I booked and planned things without telling anyone and it was so much easier and a lot less pressure to make the ‘right’ decision. Also, if you can, involve your dad. I bought my dad to help choose a dress and he ended up coming to nearly every fitting and choosing the veil! It’s one of my most favourite memories of the whole wedding process.”

WHY BRIDESMAIDS DRESSING ROOM?: “I heard about BDR through the bridal store. They were reasonably local to me and had a range of colours. I chose green dresses which isn’t really something you can get off the shelf. I also had bridesmaids that were all different shapes/sizes. It was easy to find something that complemented them all.”

OVERALL EXPERIENCE WITH BRIDESMAIDS DRESSING ROOM: “Great experience! Would definitely recommend. Aneta was so friendly and lovely. Planning a wedding is stressful but she made the whole dress process fun and easy. She was also very helpful with a bridesmaid who lived in America, getting measurements and chatting over skype.”

See the style below… 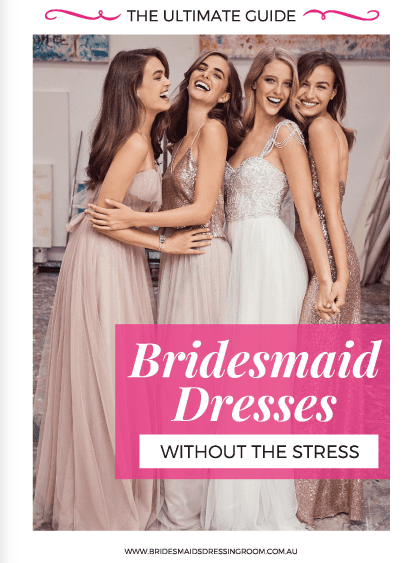 The Ultimate Guide: Bridesmaid Dresses Without The Stress